This silver coin contains 5.00 troy ounces of bullion. The melt value of one 2016 Silver 5oz. Fort Moultrie National Monument ATB is $112.90 based on the current silver spot price. 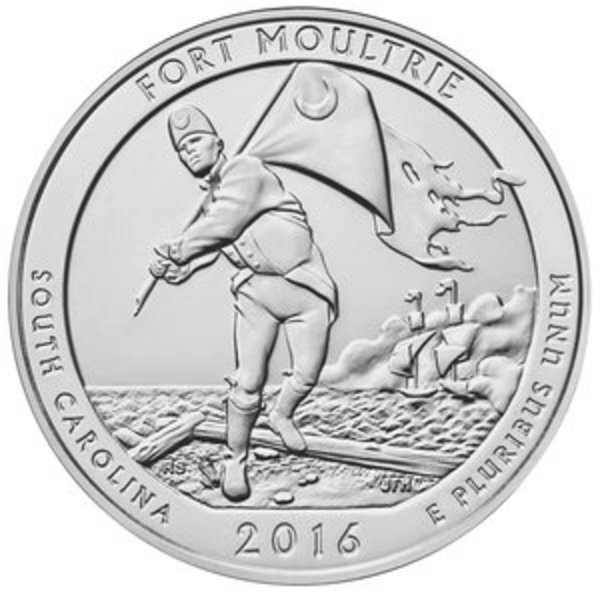 The United States Mint began this series in 2010 with the aim of showcasing the rich history, scenery and iconic landmarks throughout the country. Every coin in this series is made from 5 ounces of pure Silver and assigned a face value of 25 cents or a Quarter of a Dollar by the U.S Government.

Its reverse features an iconic scene that shows Sergeant William Jasper, an officer, running bravely onto the battlefield in order to retrieve the fallen Moultrie flag, as a fierce battle rages acoin him. This coin inspires and reminds every American of the bravery and sacrifices their forefathers made in order to craft this great nation.

The obverse of this Silver coin has the side profile of President George Washington; surcoining his portrait are the words ‘United States of America,’ ‘Liberty,’ ‘In God We Trust,’ and ‘Liberty.’

Each of these Silver coins is in brand new condition and are sourced directly from the United States mint. Since these coins are not proofs – they might contain slight imperfections on the surface, however, this does not affect the value of the considerable amount of Silver contained in this coin.

Containing 5 troy ounces of pure 0.999 Silver (Ag), these coins make a wonderful addition to any precious metals portfolio. Moreover, being eligible for use in precious metal IRAs makes them a great choice to expand your tangible investments with a pure Silver commodity. Furthermore, as they portray great scenes and depictions of events, landmarks throughout America, these Silver coins are valuable add-ons to any American Silver Bullion collections.

FindBullionPrices.com tracks prices from some of the most trusted and reputable online bullion dealers to help find the lowest prices on 2016 Silver 5oz. Fort Moultrie National Monument ATB.