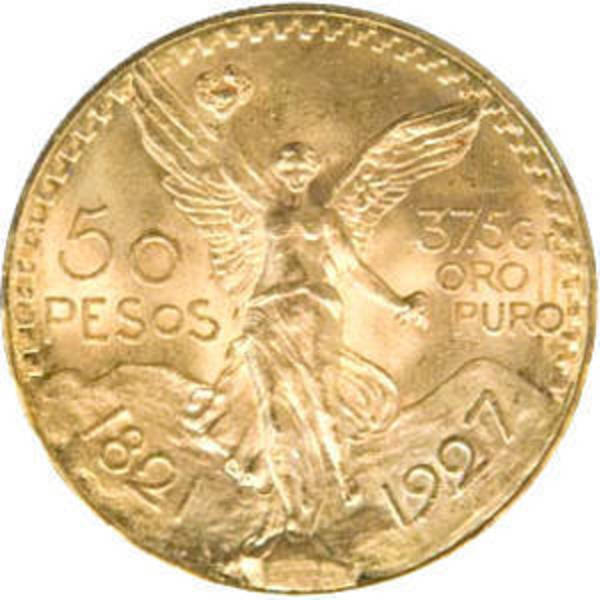 The Centenario de Oro was first minted to commemorate the centenial of the Mexican independence from Spainish colonial rule.

In 1921, Banco de Mexico minted the first Centenario 50 Pesos Gold Coin to celebrate the first 100 years of the Independence of Mexico.

Production of the Centenario coins was suspended because of diminished demand during the Great Depression.

Minting resumed in 1943 as demand for gold increased and continued until 1947.

Production of restrikes began in 1949 with coins produced dated 1947.

The minting of Centenario restrikes continued until 1972.

During a production run of restrikes in 1996, the Mexican Mint produced 7,954,777 coins. These restrike coins are a commonly available gold bullion coin.

The Centenario coin was designed by engraver Emlio del Moral.

The obverse design features a rendition of "Winged Victory", El Ángel de la Independencia. The monument was erected in 1910 in downtown Mexico City to commemorate 100 years of Mexican Independence.

The background field of the obverse shows two of Mexico's famous volcanos, Popocatepetl and Iztaccihuatl rising from the desert.

The reverse design of the Centenario gold coin features the Mexican coat of arms. The depictions shows an eagle with a snake in it's talon perched on a cactus.

One of the most stunning design features of the gold Centenario 50 pesos coin is the inscriptiton around the edge of the coin which reads "INDEPENDENCIA Y LIBERTAD", which translates to Independence and Freedom.

It is minted of an alloy that contains 90% pure gold combined with 10% copper.

The alloy gives the coin it's distinctive orange hue and makes it more durable that 24k gold coins.

Gold 50 Peso coins are ideal for gold investors due to their commonality and low premiums.

Shop other gold bullion and coins from Mexico.