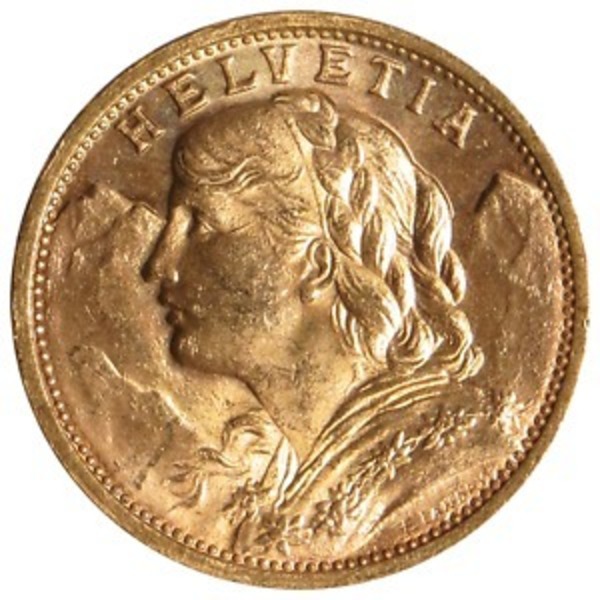 Vreneli is the informal name for a range of legal tender gold coins from Switzerland. These coins have a face value of 20 Swiss francs and were minted in a millesimal fineness of 900.

The Swiss Helvetia coins are sometimes colloquially called "Swiss Miss" from the obvious obverse motif. Helvetia is the female personification of Switzerland. She is prominently featured on the obverse.

The gold 20 franc coin's reverse shows the Swiss Shield, featuring the Swiss Cross, and a wreath of oak along with the denomination.

The coins were minted at the Swiss Mint at Bern (although the die engraving was done at the Paris mint) and coins are mint marked with a "B" (without a period).

The Swiss Vreneli or Hevetia 20 franc coins are modeled after their French counterparts and were minted as part of the Latin Monetary Union. Many were minted in the 19th century and into the first half of the 20th century.

The 20 Franc Swiss Gold Coin is among the most popular gold bullion coins worldwide because of its incredibly large mintages. Due to their commonality and pervasiveness, investors can often buy Swiss 20 Franc Gold coins close to gold spot price and make a great store of wealth.

Fractional gold coins, like the 20 francs are popular for gold stackers and preppers. The low premium over spot price helps keep dollar-cost averages low while having the financial security of physical gold.

More than 60 million coins are known minted from 1883 until 1949. Recognition as an official legal tender within thte LMU cease in 1936. Coins minted in years after dated 1947 and 1948 are restrikes.

When these coins are sold as bullion then you can usually expect to receive restrike coins.

Swiss 20 Francs gold coin restrikes are authorized by the mint and are produced to the same specifications and standards after the Latin Monetary Union was disolved.

Shop other gold bullion and coins from Switzerland.