This gold coin contains 0.20 troy ounces of bullion. The melt value of one Austria 20 Corona Gold Coin is $367.34 based on the current gold spot price. 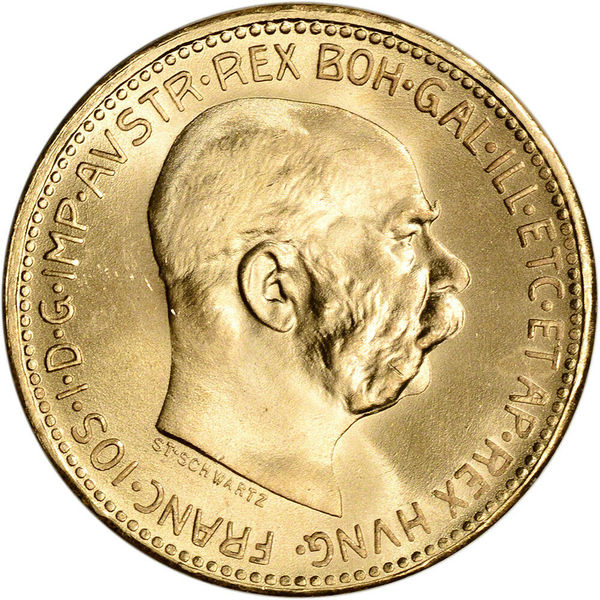 The Austrian 20 corona is one of the most popular Gold coins in the world for its recognizable design and Gold content.  These coins represent a rich historical period for Eastern Europe prior to the outbreak of World War I.

The 20 Corona gold coins were originally minted and circulated between 1892 until the death of Emperor Franz Joseph I in 1916.

The obverse of the 20 Corona (Kronen) gold coins display a right facing bust of Emperor Franz Joseph I.

Surround the portrait is the Latin Inscription, “FRANC IOS I D G IMP AUSTR REX BOH GAL ILL ET AP REX HUNG", which is an abbreviation for a much longer phrase that represents the former emperor.

A rough translation of the inscription surrounding the bust is "Franz Jozef, by the grace of God emperor of Austria, king of Bohemia, Galicia, Illyria etc., apostolical king of Hungary".

The reverse of the 20 Kronen gold coins also depicts the double headed eagle which is a symbol of the Austrian Empire. The Imperial eagle is surrounded by the following words: “XX CORONAE MDCCCCXV 20 1915 COR".

The edge of the coin is inscribed with the words “Vnitis Viribvs".

With rising inflation and soaring consumer prices, now is a great time to buy gold to help ensure your financial security.

FindBullionPrices.com tracks prices from some of the most trusted and reputable online bullion dealers to help find the lowest prices on Austria 20 Corona Gold Coin.

Comparing prices for Austria 20 Corona Gold Coin across multiple bullion dealers is the best way to pay the lowest price.

Shop other gold bullion and coins from Austria.