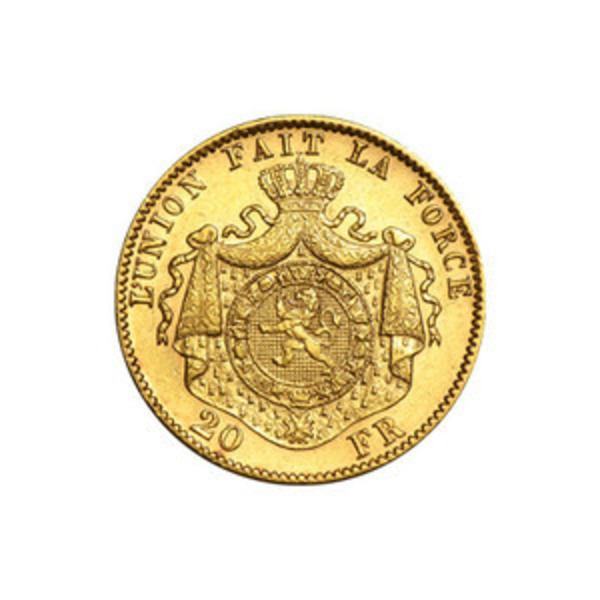 Belgium was a member of the Latin Monetary Union and minted gold coins in various denominations and several different design featuring the reigning monarchs.

Minting of the Belgian 20 franc gold coins began in 1834. The minting continued periodically until 1914.

All 20 francs gold coins from Belgium are identical in dimensions, weight, and gold content. They are minted to the same specifications as other 20 francs coins such as those from France, Italy or Switzerland.

These common gold bullion coins are minted with .1867 troy ounces of gold in an alloy that contains 10% copper. Twenty francs gold coins are popular amongst bullion investors, coin collectors and stackers of fractional gold.

In addition to the intrinsic value, the historical aspect of these coins adds some interesting context to investiing. Especially in light of the current prospects of facing a recession, buying low premium fractional gold can be part of a solid financial strategy.

History of the Belgian 20 Francs

The 20 Franc gold coin was first minted in Belgium in 1834 and was adorned the portrait of King Leopold I.

These coins were designed with a simple obverse that showed a right-facing bust portrait of the king with text inscribed that reads "LEOPOLD PREMIER ROI DES BELGES", which translates to "LEOPOLD FIRST KING OF THE BELGIANS".

The reverse showed a simple wreath motif surrounding inscriptions for the value, 20 FRANCS and the date in the center. Coins with this design were minted until 1841.

In 1864 the obverse design was updated with a fresh portrait of the mature king. The design of the wreath surrounding the inscriptions on the coins reverse was also given a more contemporary look.

Coins of this design were minted only until 1866 when the 20 Francs coin design for King Leopold II.

The King Leopold II Belgian 20 Francs shows a bearded king on the obverse, surrounded by text that reads "LEOPOLD II ROI DES BELGES". Which translates to "King of the Belgians". The year of minting is engraved below the portrait in the center.

The reverse of the Leopold II 20 Francs gold coin shows a crowned shield design that incorporates some parts of the Belgium Coat of Arms, such as the Lion. Around the top edge is the inscription "L'UNION FAIT LA FORCE", which means "Unity Makes Strength". The face value of "20 Fr" is shown around the bottom of the design.

The Leopold II 20 Franc coin was minted from 1867 until 1914 and is commonly found when buying random year coins.

Each 20 Franc contains .1867 oz of pure gold. Minted to meet the standards of the LMU, each coin is 21mm in diameter.

Shop other gold bullion and coins from Belgium.