This gold coin contains 0.24 troy ounces of bullion. The melt value of one $5 Gold Commemorative Coins is $468.67 based on the current gold spot price. 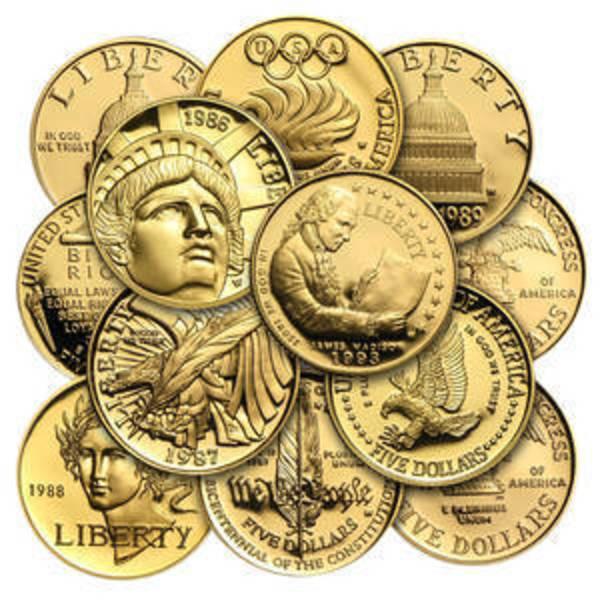 The U.S. Mint has minted beautiful $5 Gold coins to commemorate and honor important aspects of American History and Culture.

Modern $5 commemorative coins with varying design themes honoring Americans for noteworthy cultural achievements are are released annually by the US Mint.

Each Commemorative gold coin is minted from an alloy that contains 90% .999 fine gold and weighs 8.359 grams.

The $5 commemorative coins contains roughly one quarter ounce of gold that is suitable for investing or collecting.

The commemorative coins have historical significance and an appeal that allures to even those normally uninterested in coins and numismatics.

The $5 Gold Commemorative coins are a great way to add uniqueness to any investment portfolio or numismatic collection.

The Commemorative Gold coins have gained in popularity in the secondary market in recent years due to their high gold content and low premium over gold spot price.

The $5 Gold coins are high in value and high in demand. Each $5 Gold Commemorative Coin contains .24187 troy oz of pure gold.

The 1984 gold coin minted to commemorate the 1984 Olympics was the first US $5 gold coin issued in more than 50 years.

Congress has authorized the release of several commemorative coins that celebrate and honor American people, places, events, and institutions.

Although these coins are legal tender in the United States and each has a $5 face value, they are sold by the US Mint as collectible coins and not intended for general circulation.

The 5-Star Generals Commemorative $5 Gold Coin Series that was released from the US Mint in 2013 is one example of the types of coins you should expect to receive when ordering these types of coins.

The gold coins and medallions were issued by the mint to honor individuals that have influenced American culture in some way.

Other $5 Commemorative Coin Series' have included:

Modern $5 commemorative coins with varying design themes honoring Americans for noteworthy cultural achievements are are released annually by the US Mint.

Although many of these coin series' have not had garnered much interest from the general public, investors, stackers and preppers buy $5 gold coins because of their low premium. Many times these coins can be bought with either a BU or proof finish for close to melt value.

FindBullionPrices.com tracks prices from some of the most trusted and reputable online bullion dealers to help find the lowest prices on $5 Gold Commemorative Coins.

Comparing prices for $5 Gold Commemorative Coins across multiple bullion dealers is the best way to pay the lowest price.

Shop other gold bullion and coins from United States.