This silver coin contains 7.15 troy ounces of bullion. The melt value of one Walking Liberty Half Dollars - $10 Face Value 90% Silver is $170.74 based on the current silver spot price. 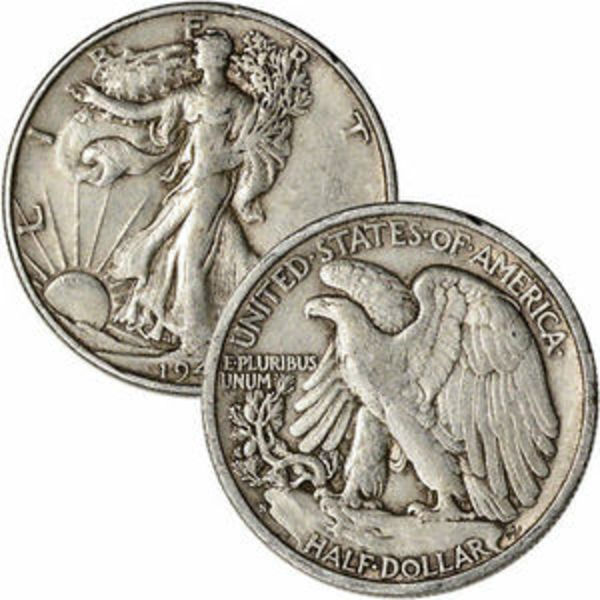 Silver half dollars were common in pocket change until the 1960s. After clad coins were introduced in 1965 wise collectors picked them out of circulation. Today, 90% Silver Coinage, commonly referred to as "Junk Silver" is still in high demand by both collectors and investors.

The Walking Liberty Half Dollar had a face value of 50 cents and was minted from 1916 until 1947.

Walking Liberty 50 cent coins were minted of an alloy containing 90% with 10% copper added to provide strength and durability.

Here are some highlights of these coins:

Half dollars are a convenient way to stack silver. Each coin contains a little over one-third ounces of pure silver. If SHTF and silver is used as a for barter, half dollars silver coins will be common and widely-accepted.

The design of these Walking Liberty half dollars was produced by Adolph Weiman in 1916. Though the design was retired in 1947, it was used once again in 1986 when the US Mint debuted the American Silver Eagle.

These half dollars are sold as lots each contains $10 face value worth of coins. They may be shipped from the dealer in tubes, paper wrappers or plastic bags depending on the dealer's inventory at the time you place the order.

Even though these coins are circulated most coins have survived with dates fully intact which is an indicator that the each coin will be close to it's minted weight.

FindBullionPrices.com tracks prices from some of the most trusted and reputable online bullion dealers to help find the lowest prices on Walking Liberty Half Dollars - $10 Face Value 90% Silver.

Comparing prices for Walking Liberty Half Dollars - $10 Face Value 90% Silver across multiple bullion dealers is the best way to pay the lowest price.