This gold coin contains 1.00 troy ounces of bullion. The melt value of one 2023 Britannia King Charles 1 oz Gold Coin is $1938.10 based on the current gold spot price.

4.1500
★★★★★
★★★★★
Silver Gold Bull Review: Yes I do! I purchased some 90% Silver at a very, very good price! Silver Gold Bull can not be beat when it comes to service and price!! I even got the coins that I wanted to have ....Lucky me!
4.1500
★★★★★
★★★★★
Monument Metals Review: Jonathan has been excellent EVERY SINGLE TIME, I've purchased from him, price, speed of delivery, I have this as my number 1 place to buy precious Metals.Grade A+
4.1500
★★★★★
★★★★★
SD Bullion Review: I've been purchasing from SD Bullion for more than four years now. I have loved my dealings with them. They always offer the lowest prices on the bullion products that I like to purchase and stack. Plus they helped guide me on...
4.1500
★★★★★
★★★★★
APMEX Review: I love APMEX for their great selection and extremely fast processing & shipping. I recently ordered a premium silver set believing it was a good value. I later decided to search the site and calculate each piece separately and...
4.1500
★★★★★
★★★★★
UniversalCoin.com Review: I purchased several coins from Universal. It was my first purchase from them...but it Will Not Be The Last. I found them professional, friendly and truthful and my order was completed and received in perfect condition in a... 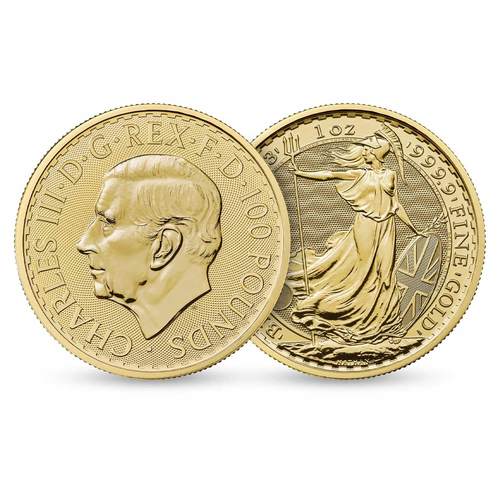 Minting of the 2023 mintage coins had aleady begun when Queen Elizabeth died several months ago. The first release of the 2023 Britannia features the familiar portait of the Queen.

The design of the coin has since been updated to include a new design that incorporates an effigy portrait of King Charles III.

The traditional history of the British monarchy dictates that the reigning ruler appear on the obverse of coinage and currency.

The Latin phrase “Decus Et Tutamen” (An ornament and a safeguard) is etched along the inner edge on the front of the coin.

The effigy of His Majesty King Charles was designed by sculptor Martin Jennings. Jennings worked from a variety of photographs to create the composite used in the coin's design.

The reverse showcases the mytholigical figure Britannia. The design was created by Nathan Hale. The legendary warrior is shown wearing a toga and carrying a large shield. She stands proudly while she wields a trident in her outstretched arm.

The 2023 Great Britain 1 oz Gold Britannia .9999 Fine Coin from the British Royal Mint is enhanced with security features to prevent counterfeiting that are incorporated directly into the design elements.

The Britannia Series from the Royal Mint is the official bullion coin of Great Britain.

FindBullionPrices.com tracks prices from some of the most trusted and reputable online bullion dealers to help find the lowest prices on 2023 Britannia King Charles 1 oz Gold Coin.