This gold coin contains 0.10 troy ounces of bullion. The melt value of one 1/10 Ounce War in the Pacific - Perth Mint Australian Gold Coin is $187.42 based on the current gold spot price. 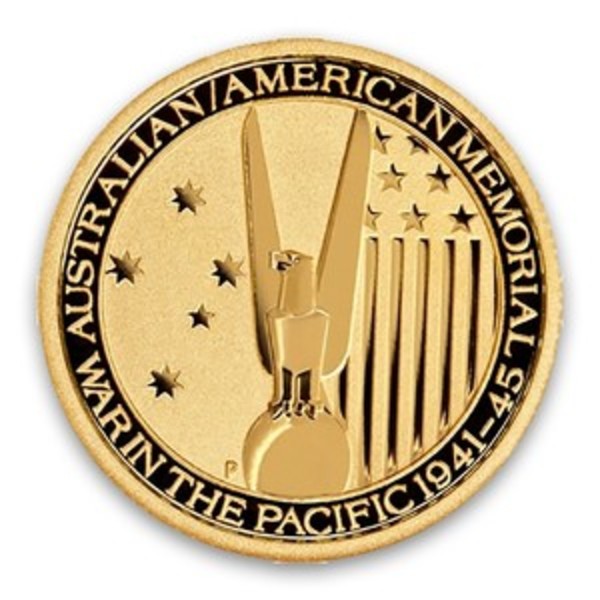 The Perth Mint created the War in the Pacific coin series to commemorate the partnership between Australia and United States during World War II.

Australian and American forces fought together to defeat the Japanese Imperial Navy and Army during the war.

The US entered the war after the Japanese attacked the American Naval Fleet at Pearl Harbor, Hawaii. This began a long-term island-hopping campaign that swept across the Pacific Ocean towards Japan. From 1941 until August 1945, the Americans combined with the Australians to lead the Pacific region to freedom and safety.

Coin Design
The reverse designs of these coins feature several different variations that military battles, victories or significant achievments during the war.

Some of the coins in this series include:

The obverse design has Ian Rank-Broadley's right facing portrait of Her Majesty Queen Elizabeth II along with inscriptions that include the face value of the coin, the date, 1/10 OZ 9999 GOLD, ELIZABETH II and AUSTRALIA.

These gold coins are sought after by bullion investors. They can often be purchased for a very low premium over spot price, which makes them an excellent fractional gold investment.

Dealer inventory will vary based on availability. Some may contain specific coins in the series, others may have random coins from the series.

Each of the coins in this series carry a legal tender face value and are backed by the sovereign government of Australia and the Perth Mint.

FindBullionPrices.com tracks prices from some of the most trusted and reputable online bullion dealers to help find the lowest prices on 1/10 Ounce War in the Pacific - Perth Mint Australian Gold Coin.

Comparing prices for 1/10 Ounce War in the Pacific - Perth Mint Australian Gold Coin across multiple bullion dealers is the best way to pay the lowest price.

Shop other gold bullion and coins from Australia.