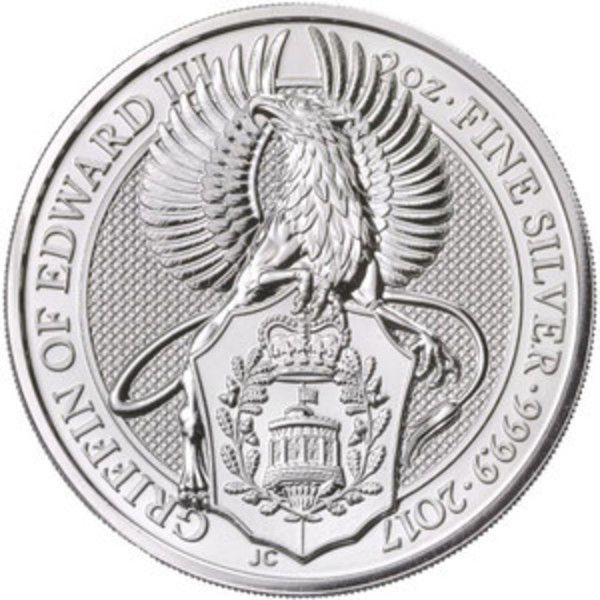 The second release in a 10 coin series from The Royal Mint that features the heraldic, majestic beasts that stood guard at Queen Elizabeth II's coronation. The griffin of Edward III Queen's Beast is an ancient mythical beast. It was considered a beneficent creature, signifying courage and strength combined with guardianship, vigilance, swiftness and keen vision. It was closely associated with Edward III who engraved it on his private seal. The shield shows the Round Tower of Windsor Castle, where Edward III was born, with the Royal Standard flying from the turret, enclosed by two branches of oak surmounted by the royal crown. The griffin is a legendary creature with the body, tail, and back legs of a lion; the head and wings of an eagle; and an eagle's talons as its front feet. Because the lion was traditionally considered the king of the beasts and the eagle the king of birds, the griffin was thought to be an especially powerful and majestic creature. The griffin was also thought of as king of all creatures. Griffins are known for guarding treasure and priceless possessions.

You can easily and quickly compare bullion dealers to find the lowest prices for silver coins at FindBullionPrices.com. If you don't see something you're looking for Contact Us and let us know so we can add it.

Our Closest to Spot tool can help you find the lowest premium when you are ready to buy silver coins for the best online prices.