This silver coin contains 2.00 troy ounces of bullion. The melt value of one 2016 Great Britain 2 oz Queen's Beasts The Lion is $45.16 based on the current silver spot price. 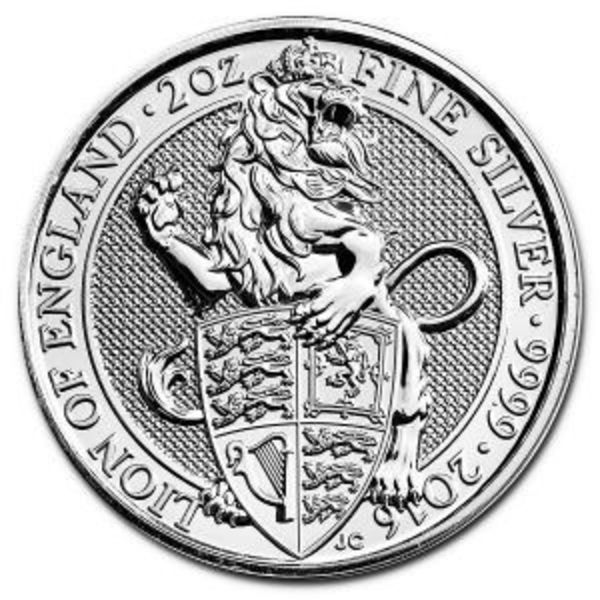 With this first release of the Queen's Beasts series, the 2016 2 oz .9999 fine silver Queen’s Beasts Lion silver coin most certainly demonstrates the finest of craftsmanship. First in the ten-coin series, highly respected engraver, Jody Clark was selected to design the Queens Beasts Lion. The intricate detail captured on the image is nothing short of inspiring. Contributing greatly to the decades of British heritage represented in the 10 original painted-plaster statues of 1953, this magnificent coin has been highly praised. Minted in high relief with highest purity and 2 oz weight, this silver bullion coin has become a highly treasured favorite among collectors and precious metals investors world-wide. The coins obverse displays Her Majesty Queen Elizabeth II, and the 5 pounds face value. Quite interestingly, the Queens portrait was also designed by Jody Clark and adopted into British coinage since 2016. The reverse features a stylized and beautifully detailed image of the crowned Lion of England encircled with the inscriptions, “LION OF ENGLAND  2 oz FINE SILVER  999.9  2016”. The designers initials are below and to the right of the shield.

FindBullionPrices.com tracks prices from some of the most trusted and reputable online bullion dealers to help find the lowest prices on 2016 Great Britain 2 oz Queen's Beasts The Lion.

Comparing prices for 2016 Great Britain 2 oz Queen's Beasts The Lion across multiple bullion dealers is the best way to pay the lowest price.