This silver coin contains 2.00 troy ounces of bullion. The melt value of one 2021 Great Britain Queen's Beasts Series Completer 2 oz Silver Coin is $48.50 based on the current silver spot price. 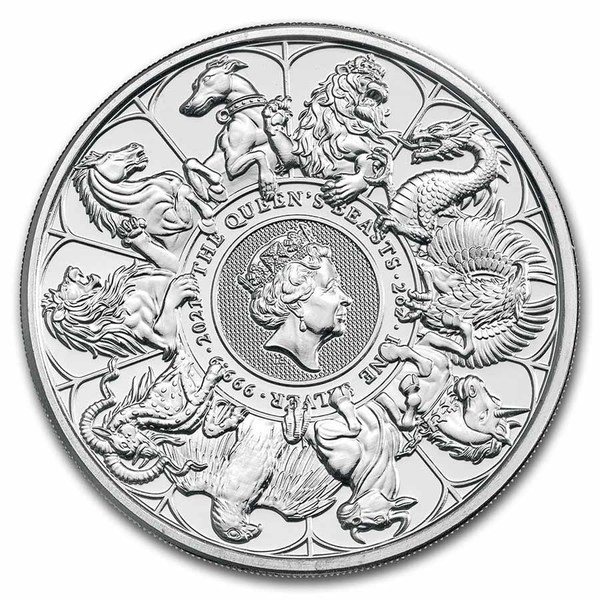 This coin is the final coin in the Queen's Beasts coins series. This coin's release marks the completion of the series.

The statues were sculpted by James Woodford RA for the coronation ceremony.

The coins each depict one of the The Queen's Beasts, reimagined by Royal Mint Coin Designer Jody Clark.

The final coin design for this popular bullion collection depicts all ten beasts in a protective circle around Her Majesty The Queen.

Reverse
The reverse features all 10 of the Queen's Beasts that appeared in the series surrounding a small version of the Queen's portrait, as well as the inscription, "2021 • THE QUEEN'S BEASTS • 2 oz • FINE SILVER • 999.9. The initials of the artist Jody Clark appear just below the portrait.

FindBullionPrices.com tracks prices from some of the most trusted and reputable online bullion dealers to help find the lowest prices on 2021 Great Britain Queen's Beasts Series Completer 2 oz Silver Coin.