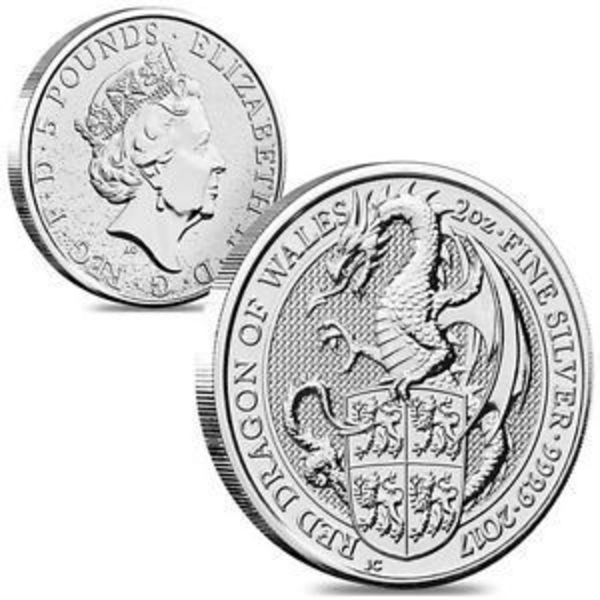 The Red Dragon of Wales

The 2017 Queen's Beasts Silver coin is the third 2 oz Silver British Bullion coin from the Royal Mint. The Celtic dragon represents sovereignty and power. The Welsh dragon was used in the Royal Arms in the sixteenth century and the Red Dragon of Cadwallader is the emblem on the national flag of Wales. The red dragon gained popularity due to it supposed link of being the battle standard of King Arthur and other ancient Celtic leaders. Its association with these leaders along with other evidence from archeology, literature, and documentary history led many to suppose that it evolved from an earlier Romano-British national symbol. During the reigns of the Tudor monarchs, the red dragon was used as a supporter in the English Crown's coat of arms.

FindBullionPrices.com searches over 30 national, reputable and trusted bullion dealers to find the lowest prices on 2017 Queen's Beasts The Dragon 2 oz Silver and other The Queens Beasts products. The prices on our site for silver bullion and coin are updated hourly and adjusted for silver spot price. We give you the tools to compare silver prices from reputable and trusted bullion dealers. Compare 2017 Queen's Beasts The Dragon 2 oz Silver prices across bullion dealers to pay the lowest price.

We will help you find the best prices for 2017 Queen's Beasts The Dragon 2 oz Silver when you're ready to buy.

You can compare bullion dealers and find the lowest prices for silver coin at FindBullionPrices.com. If you don't see something you're looking for Contact Us and let us know so we can add it.