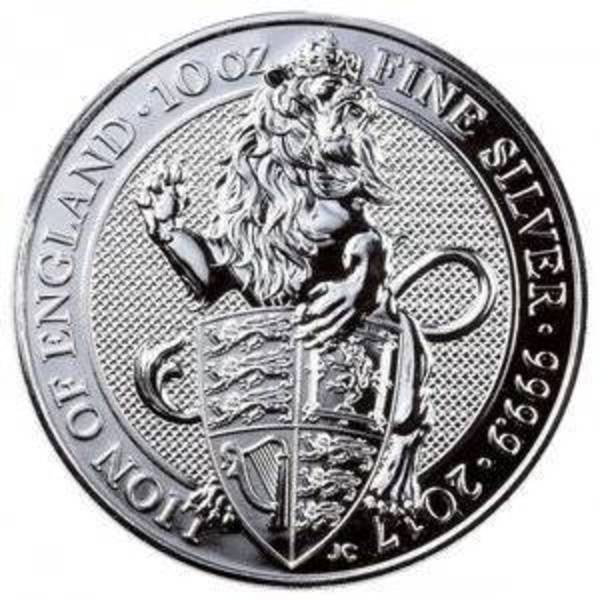 The Lion of England is the first release in the Queens Beasts series from the British Royal Mint.

Each coin comes protected in a mint-issued plastic capsule.

About The Queen's Beasts - The Lion

The Lion holds a shield showing the Arms of the United Kingdom as they have been since Queen Victoria's accession to the crown in 1837.

In the top left and bottom right corners of the shield are the lions of England, taken from the coat of arms of Richard I "The Lionheart" (1157–1199).

The lion and tressure (armorial border) of Scotland appear in the top right, and the harp of Ireland is in the bottom left.

Investing in The Queen's Beasts

Since the introductory release of the 2 oz Queen's Beasts Lion coin in 2016, the value of this glorious silver coin has increased tremendously. After quickly selling out investor and collector demand soared which has caused the premiums to continue to reach new highs.

Values of the 2016 Queen's Beasts Lion 2 oz Silver Coin are likely to continue to climb in years to come.

The 2017 Queen's Beasts Lion 10 oz Silver coin sold out quickly as well. The value has continued to rise since release.

FindBullionPrices.com tracks prices of reputable and trusted bullion dealers in the United States to find the lowest prices on 2017 10 oz Silver Queen’s Beasts - The Lion , other The Queens Beasts products. The prices on our site for silver bullion and coins are updated hourly and adjusted with silver spot price. We give you the tools to compare silver prices from reputable and trusted bullion dealers. Compare 2017 10 oz Silver Queen’s Beasts - The Lion prices across bullion dealers to pay the lowest price.

We will help you find the best prices for 2017 10 oz Silver Queen’s Beasts - The Lion when you're ready to buy.

You can compare bullion dealers and find the lowest prices for silver coins at FindBullionPrices.com. If you don't see something you're looking for Contact Us and let us know so we can add it.

Check our closest to spot tool when you are ready to buy silver bullion for the latest prices.