This silver coin contains 10.00 troy ounces of bullion. The melt value of one 2020 Great Britain 10 oz Silver Queen's Beasts The Falcon is $238.80 based on the current silver spot price. 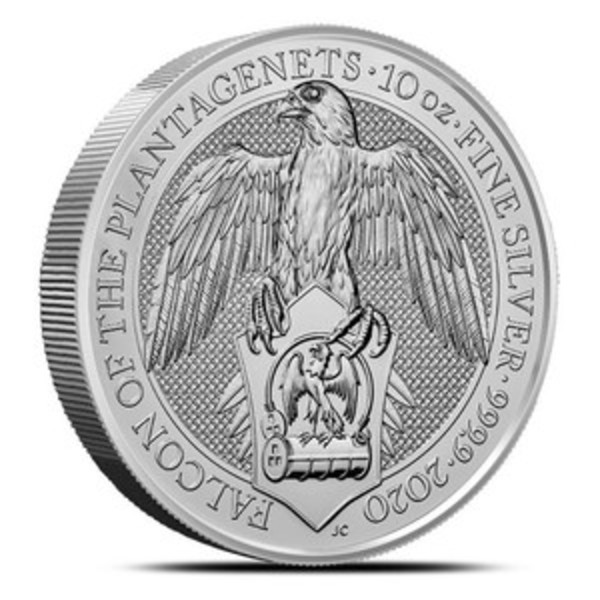 The Falcon Of Plantagenets

The Falcon Of Plantagenets is the sixth release in the Queen's Beasts silver bullion series of coins from the Royal Mint of London.

At the Queen's coronation, the The Falcon Of Plantagenets held a shield with a badge depicting a second white falcon within an open golden 'fetterlock' or padlock.

The fetterlock and the falcon were popular emblems in the Houses of both York and Lancaster, as they had descended from Edward III's younger sons John of Gaunt and Edmund of Langley. The fetterlocks used by John and Edmund were always locked, perhaps to show they had no claim to the throne. Edward IV gave his younger son, Richard, the badge of a white falcon within an open fetterlock - the lock Edward forced to take the throne. Henry VII, who united the houses of York and Lancaster with his marriage to Elizabeth of York, often used a falcon symbol and it was said to be the favourite badge of Queen Elizabeth I.

FindBullionPrices.com tracks prices from some of the most trusted and reputable online bullion dealers to help find the lowest prices on 2020 Great Britain 10 oz Silver Queen's Beasts The Falcon.