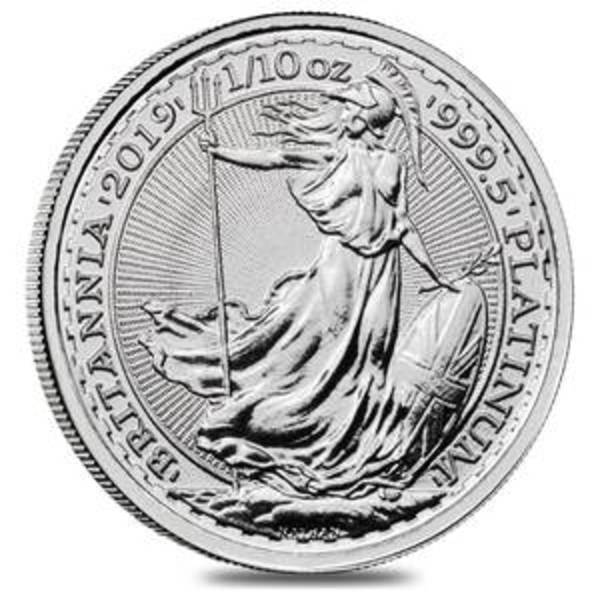 The British Royal Mint is thrilled to bring the 2019 Great Britain 1/10 oz Platinum Britannia Coin. This beautiful one-tenth ounce platinum coin is the second in this size in the Britannia Series. Britannia was the name given to the new Roman province in the British Isles following the successful conquest of most of the region by the Roman Empire in the first century AD. Emperor Hadrian issued currency for the province that included images of Britannia, the female personification of the province.

Images of Britannia featured on Roman coins throughout its control of the province, but Britannia would not regularly appear on British currency again until 1672 when King Charles II issued coins with this long lasting symbol of strength, integrity, and valor. Every monarch since Charles II has used Britannias image on coinage.

The series started in 1987 with the gold coin issue, known as the Gold Britannia, and has expanded only once before, in 1997, with a silver version of this coin. Over time, both the Gold and Silver Britannia coins have had changes in design and metal purity. This made them in strong demand among collectors and investors.

The obverse features the fifth-generation portrait of Queen Elizabeth II. Britain’s longest-reigning monarch, and currently the longest reigning in the world. Her Majesty is featured in a right-profile relief. This portrait was created in 2015 by Jody Clark. The reverse depicts the symbol of strength and progress British people well-know as Britannia. Britannia symbolizes the strength of the British people since the Roman era.