This silver bar contains 10.00 troy ounces of bullion. The melt value of one 10 oz Mount Trumpmore Silver Bar is $238.60 based on the current silver spot price. 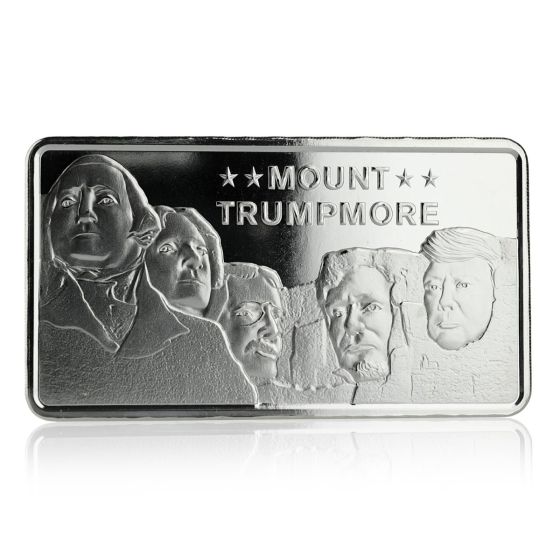 There is no doubt that Trump remains a polarizing political figure with a strong following.

The creative team at Scottsdale Mint designed the obverse of this unique high-relief silver bar that inserts a bust of the head of former President Donald Trump among the founding fathers on Mount Rushmore.

The reverse of this silver bar contains the colonial flag originally designed by Betsy Ross with 13 stars in a circle.

Whether you like him or hate him, Trump has earned a place in American history as the 45th President of the United States. His rise in popularity as a leading political figure reinforces the disdain many Americans feel towards both parties. Much evidence of the corruption contiues to expose many in Washington.

Many take issue with his non-politically correct approach to handling the business of his administration. Opponents will exploit his crass demeanor and style and project criticism of every action his administration takes without exception.

Many supporters, however, have grown tired of the modern political theater that has become the product of mainstream news and Congress over the last decade.

Trump's Pro-American policies are the real change the people are expecting in an otherwise increasingly globalist world. His legacy is subjective, but his place in our history is undeniable.

Struck by Scottsdale Minting, a leading private mint based in Arizona.

FindBullionPrices.com tracks prices from some of the most trusted and reputable online bullion dealers to help find the lowest prices on 10 oz Mount Trumpmore Silver Bar.

The silver prices on our site for bars and bullion are updated hourly and adjusted with silver spot price. We give you the tools to compare prices of silver bars from well-reviewed bullion dealers.

Our Closest to Spot tool can help you find the lowest premium when you are ready to buy silver bars.